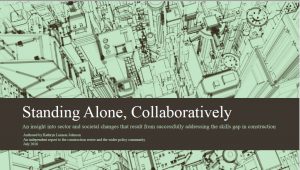 At the heart of everything to do within construction and built environment is People. Whether they’re delivering the work, paying for it, or living with the outcomes of it. The information and views in this report are based on research collated at our Built Environment Skills in Schools events (in partnership with the Hot500), the Built Environment Skills in Schools platform, roundtables, outreach and engagement activity with schools and students, interviews, desk research, and webinars. A core theme in the responses contained within this report comes from young people struggling with a built environment they played no part in creating.

So much has been tried over the years – does the sector not want to get better? Is it actually better than the picture it presents? Is nothing short of wholesale change going to be enough? Well, there is no more ‘do nothing’ option. Whilst time has passed, a brutal recession has been and gone, and the UK has voted to leave the EU, the skills shortage in construction continues to be a constant. The change is now coming from outside the sector – from empowered citizens, informed communities, eager innovators, and connected young people who are expecting more than simply a pay cheque from their future careers. Although connection and engagement with the general public are vital, it seems that a lack of understanding of the pressures and mindsets of the audience we seek to reach has played a part in making this harder than it would at first seem to be.

A better built environment, collaboration, and increased skills are all part of the same whole – change in one won’t happen without the others, but the sum will be greater than the individual parts. The
world has real problems being felt by real people, and in part these have been caused by a lack of connectivity and collaboration. Instead, the focus has been on short-term wealth and questionable ethics. The outputs, that is the results delivered to ordinary people living their lives, have been average at best